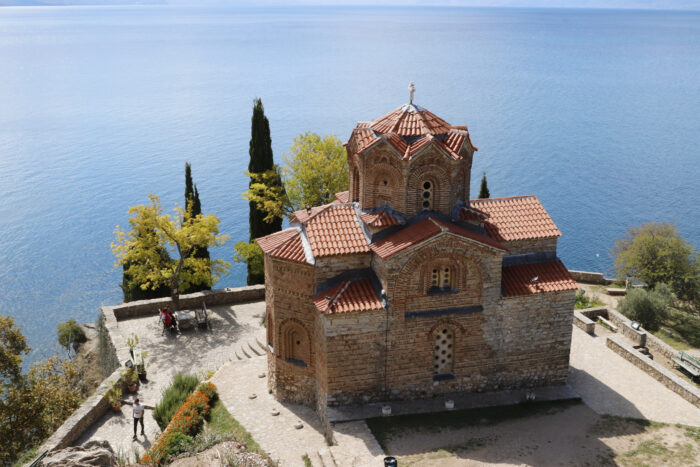 Ohrid – churches, monasteries and mosques as far as the eye can see, which is why the city is often called the Jerusalem of the Balkans. Ohrid has just 42,000 inhabitants and is idyllically situated on one of the oldest freshwater lakes in the world. It is surrounded by a fascinating mountain panorama that stretches far beyond the country’s borders to Greece and Albania. Ohrid is rich in history and culture that is waiting to be discovered.

It almost seems as if time has stood still when I arrive at St. Paul the Apostle Airport in Ohrid early this morning. Old Yugos, Ladas and Renaults, which have not been seen on our roads for 30 years, still dominate the street scene here. After my drive in one of these ex-Yugoslavian bolides to the old town of Ohrid, I am first impressed by the beauty of the town and its location on Lake Ohrid.
My driver and today’s tour guide is Nikola Kiselinov, an archaeologist who founded the local – Ohrid Tourist Association http://ohridtouristassociation.com/ – more than 20 years ago as a private initiative. Over breakfast on the lakeside, we not only chat about Ohrid’s current tourist development, but also enjoy the most famous dish of the region, a delicious trout soup with fish eggs.

Ohrid is a religious place! This is not only evident from the 365 churches, some of which are still underground and waiting to be discovered, but also from its theological university, which already housed around 1500 monks hundreds of years ago. According to a legend based on observations by a 15th century Ottoman traveller, there were once 365 chapels within the city limits of Ohrid, one for each day of the year. Nikola the trained archaeologist is in his element as he shows me the numerous excavations within the narrow streets of the old town. Since 1980, Ohrid has been a UNESCO World Heritage Site, a title that on the one hand attracts tourists, as Nikola says, but on the other hand is also a political mandate to those responsible to preserve the city’s history.

That’s why anyone who wants to demolish their old house in Ohrid today in order to build something new has to get an archaeological report beforehand, Nikola explains to me. If important archaeological finds are discovered during demolition, it can even happen that a building ban is imposed and the property has to be sold to the state.
Ohrid is full of historical excavation sites, such as the amphitheatre from around 200 B.C., situated on a hill above the city, which once accommodated more than 3000 visitors.

The remains of Ohrid’s former fortress tower about 100 metres above the city. In the course of history, the fortress was destroyed, rebuilt and extended several times, so that it bears traces from almost all historical periods in which Ohrid was ruled by Romans, Byzantines, Slavs and Ottoman Turks.
Just a few hundred metres below stands the historic Byzantine church of St. Clement, whose location affords a stunning view of crystal-clear Lake Ohrid. A new theological university is to be built in a few years over the remains of the excavations on the former monastery site. A little further down through the forest you come to the next church, the Orthodox Church of St. John of Kaneo. This is probably the most popular photo motif in the city, as the participants of the numerous tour groups from the Netherlands, Poland and Germany prove with their cameras.

On the way back to the centre of Ohrid via a more than dilapidated wooden footbridge along the lakeshore, the problem of the region and probably the whole of northern Macedonia becomes apparent: the lack of money. Our tour guide Nikolas sums it up at the end of our tour: “This region would have so much to offer in terms of tourism, but it is failing because of the corruption and ignorance of those responsible”, which is why Ohrid is still considered an insider tip that deserves to be discovered at last.