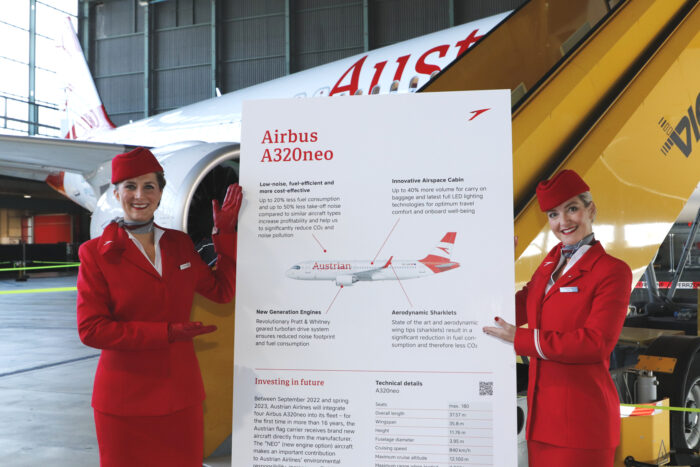 After 16 years, Austrian Airlines (AUA) has once again taken delivery of a brand new aircraft. The Airbus 320neo made its maiden flight from Schwechat to the British metropolis.

It has been a long time since AUA had anything to celebrate. On Tuesday (18 October), however, the hangar at Schwechat Airport was transformed into an event area when the airline’s management, together with Labour and Economic Affairs Minister Martin Kocher (ÖVP) and around 1,000 invited staff and guests, celebrated the arrival of the new A320neo. The day after, the aircraft was already in the air again. It flew from Schwechat to London Heathrow, all 180 seats were occupied and the flight was fully booked. Incidentally, the British capital was not chosen without reason, because 65 years ago AUA took off for its first flight to the metropolis immediately after its foundation.

Within the company, the new Airbus is regarded as an ambassador for more sustainable flight operations. Not only its kerosene-saving engines, but also its up to 50 per cent quieter engines set new standards in this regard and should help to reduce costs and environmental impacts accordingly in the future. According to AUA, up to 3,7000 tonnes of CO2 can be saved compared to the predecessor model, depending on the route.

This is also reflected in the naming of the new aircraft. Following an internal tender, the new aircraft was christened “Donau-Auen” during the event. It was submitted by A320 co-pilot Timon-Niklas Grusetchi, whose idea was selected from a total of 280 employee suggestions.

Austrian CEO Annette Mann was visibly pleased with the arrival of the aircraft in her speech at Schwechat Airport: “Things are looking up again, we are fit to fly again and will grow from the current 61 to 65 aircraft by spring 2023.

Mann’s colleague on the Executive Board, Michael Trestl, was pleased about the deployment of the environmentally friendly aircraft: “The aircraft will be used throughout the entire route network, but especially where the efficiency of the aircraft is particularly effective”.