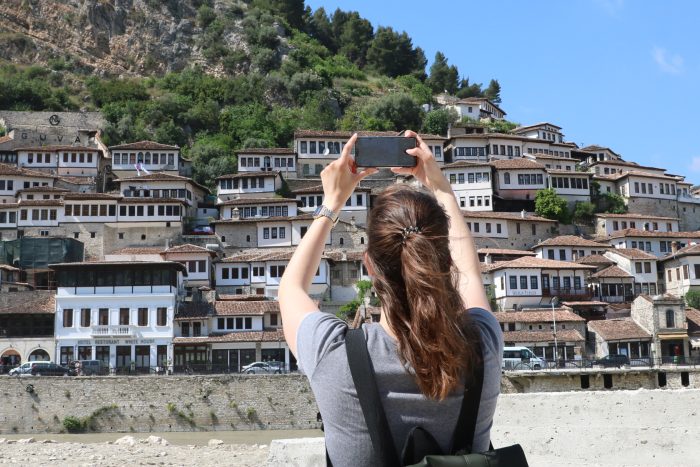 In recent years, Albania has made a name for itself as an interesting Mediterranean destination, yet the country is still considered an insider tip among a few Austrian travel professionals. Martin Dichler went to the north of Albania for Reiseinsider to learn more about the advantages of this unknown country.

Hundreds of kilometres of untouched beaches, dreamlike mountains, ancient sites and fantastic castles recently attracted more than 2.6 million tourists to the country. Albania has everything you need for a relaxing holiday and yet the country, whose capital Tirana is just 1,100km from Vienna, is still unknown territory for many Austrian holidaymakers. While many travel destinations were still struggling with the consequences of the pandemic last year, Albania has already seized the opportunity and, thanks to simplified entry regulations, quickly picked up on its pre-Covid tourism boom.

Albania is changing and this change can best be observed in the capital Tirana, where an unimaginable building boom has changed the image of the city within a very short time. In the city of 420,000 inhabitants, work is going on around the clock on new hotels, apartment buildings and the expansion of the existing infrastructure. A comparison with the rapid development of Dubai 25 years ago is therefore quite appropriate. Construction is not only taking place in the city, but also at the international airport. A terminal extension should help to cope with the rush of visitors – in the first four months of this year 41% more visitors came to the country than in the previous year.

There is a need to catch up, because for too long the country suffered under the dictatorship of the notorious ruler Enver Hoxha, who catapulted the Balkan state back into the Stone Age during his four-decade rule. Today, as an eternal memorial to the terrible history, there are 173,371 bunkers scattered across the country that the former dictator had built during his rule. Some of these gloomy bunkers (https://www.bunkart.al/) can still be visited today, although Albania’s capital shines more with its finely spruced-up boulevards, restaurants and street cafés than with its reminders of the dark period in history. Albania’s youthful capital pulsates and at the central Skanderberg Square you get a good impression of the current changes. If you want to try the excellent Albanian cuisine during your stay in Tirana, a visit to the “Taverna Zoto” run by the Zoto family on George W. Bush Road is recommended. The passionate young chef of the restaurant, who also cooked in Germany for a long time, now runs the street restaurant together with her mother, which specialises in Albanian dishes from “mother’s kitchen”. It is not without reason that the restaurant is advertised on tripadviser with 5 stars.

“Come back in two years, you won’t recognise the city,” says the newly elected mayor of Durres, Albania’s second largest city, when I am invited to the mayor’s meeting. Today, about 115,000 people live in the famous harbour city, which can be reached by car within only 30 minutes from Tirana. On the one hand, the city lives from its port and the associated industry, but also from its history and the resulting tourism. The amphitheatre, which once seated around 20,000 people, is located in the centre of the city and is soon to become a UNESCO World Heritage Site, which the new mayor, Emirana Sako, expects to boost tourism even further. In order to preserve the ancient amphitheatre for posterity, which has still not been fully excavated, the city is currently having illegal buildings removed that were erected on the site of the historic site during communism.

Durres is full of history and a visit to “Villa Austria”, a 19th century residence that served as the official residence of Austrian Consul Josef Teddeschini, illustrates this particularly well. Joseph & Alma, today’s descendants of the consul, preserve the Villa Austria and rent it out as a bed & breakfast with its historically furnished rooms to interested visitors from all over the world. Those who stay in this house will enjoy spending time with the delightful couple, who are happy to give visitors a profound insight into the history of the former Austrian consulate over a glass of raki, coffee and homemade cakes.

Another place in Durres that is steeped in history is the 5-star Hotel Adriatik (https://www.adriatikhotel.com/). This former state hotel served as accommodation for foreign state guests during the communist era, complete with listening devices in every room.  Today, it is not only the location of the hotel with its flat-sloping and particularly family-friendly beach that enchants its guests, but also its luxurious facilities. Renovated in 2017, the hotel not only pampers the mind and soul of its visitors with a variety of treatments at the Queen Teuta Spa, but also boasts one of the best restaurants in town with its in-house maritime Apollonia Restaurant.

“The new Europe” – a port project worth billions of euros

While the Adriatik Hotel is the perfect retreat for stress-ridden holidaymakers, things could get a little more turbulent in the north of the city in the next few years. Construction will soon begin on a tourism harbour costing around two billion USD, which will offer hotels, a marina and space for cruise ships. According to Albania’s Prime Minister Edi Rama, the new facility, already referred to as the “New Europe”, will be built by the Dubai-based Emaar Group and will become one of the largest and most beautiful tourist ports in the Mediterranean. The same group that built the Burj Khalifa and the Dubai Mall is behind the deal. For Emaar owner Mohamed Alabbar, the project is a timely investment, as politiko.al magazine recently wrote: “When I see what is happening in Albania with the government, I see how much everyone is working to develop the country, to move it forward, and as I can say, I want to be the first to go there and invest. All the indicators are right, tourism has doubled and the 450-kilometre coastline overlooking nearby Greece is fantastic,” Alabbar said in the interview.

If you want to avoid all the hustle and bustle about the future tourist development of Durres, you should take a trip to one of the many wineries in the surrounding area. About 30 minutes from Durres, the new winery ABAIA offers excellent young wines of the Kalmet and San Giovese brands. During a wine tasting in the middle of the newly planted vineyards, managing director Evalt Domi is happy to explain to his visitors the process of producing his currently around 8000 bottles of organic wine per year. The wine cellars and storage cities of the noble drop may be considered a curiosity. Three former bunkers, each with an area of 160 square metres, offer the ideal place for the maturation and production of the still young Abaia wine.

Berat, the city of a thousand windows

If you drive about two hours from Durres into the southern interior of the country, you can get to know one of the most interesting cities in Albania. Berat, the city of a thousand windows, has not only been a UNESCO World Heritage Site since 2008, but is also home to one of the most beautiful castle complexes in the Balkans. Around 1200 people still live in the fortified castle complex from the 14th century, with its castle gates, 24 towers and around 250 houses. Those who want to stay longer at the castle can choose from small hotels and cosy restaurants, which often offer an incredible view of the surrounding countryside from the 240-metre-high castle.

After the castle was closed to visitors during communism, even the oldest inhabitants of Berat have now recognised the tourist potential of their place of residence after the opening of the country. Numerous house owners are therefore happy to open their doors and offer visitors to the castle complex their private terraces and gardens for a rest.

One of these privately run house cafés is that of the now 81-year-old Vjoleta. When she sees me and my tour participants, the joy is great as we stroll towards her house. Each of the guests is greeted with a warm embrace, which reflects exactly the Albanian hospitality that I have experienced time and again during my previous trips to Albania. Despite the language barrier, one is immediately invited to the house terrace, where water, Turkish coffee, homemade marble cake and fruit from the local garden preserved in sugar syrup are offered without being asked. As our local guide Mario from the organiser www.adriatiktours.com translates for me, the lady has been living here in the castle complex as a widow for decades. To supplement her modest pension of around € 140, she has opened the doors of her modest home to tourists. From the looks of it, Vjoleta enjoys the visit of the foreign guests, who offer a change from the otherwise bleak life in the castle complex.

If it were up to me, I would award the spry pensioner a medal for her services to tourism in Albania, because no one could better represent the hospitality, warmth and modesty of her country than Vjoleta. Those who want to experience the originality of this country for themselves should hurry, however, because as the mayor of Durres said: “You will not recognise this city (and probably soon the whole country) in two years.