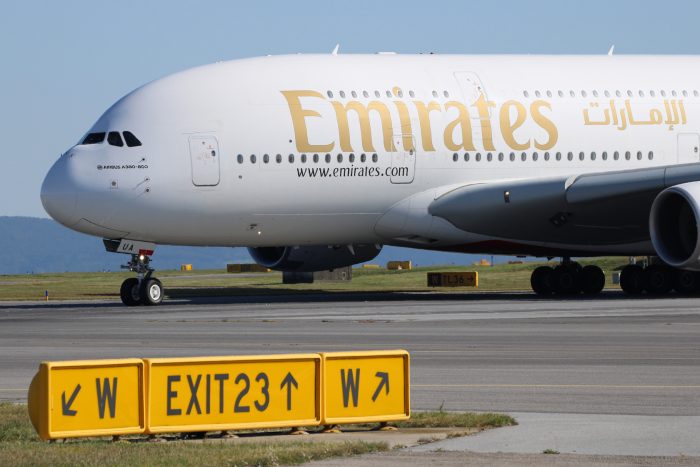 For many pilots, a job in the cockpit of an A380 is a lifelong dream; for Markus Ausserhofer, this dream came true in 2011. Since then, he has been flying the Airbus giant as one of only a few Austrians worldwide, with the world’s largest A380 operator Emirates.

Martin Dichler:
Your pilot career began in 1995 with Austrian Airlines, where you moved to Emirates in Dubai after 13 years. What were your motivations for the new start at that time?

Markus Ausserhofer:
I was lucky that I was already working in flight operations management as a captain at Austrian Airlines at that time, but nevertheless there was still a desire for me to want to fly for a larger airline. At some point, I knew that this airline could only be called Emirates. I was fascinated by the route network, the product and the rapid expansion that the airline had achieved in such a short time. I already knew Dubai as a new center of life from an earlier stay. Of course, it was clear to me at the time that I would not only have to move back to the right-hand (pilot) seat, but also lose my management position. But the possibility of flying on the A380 in the future, which I had always been enthusiastic about and whose development I had followed from the very beginning, was ultimately the decisive reason for me to make a new start at Emirates.

A direct switch to the A380 was not possible at that time?

I came here in June 2008, almost at the same time as Emirates started A380 operations. At that time, it was not possible for me to join the A380 directly, but I had hoped that I would one day be able to switch to the A380 via the Airbus track, where I flew on the A330/340 for some time. By the way, the time on the A330/340 was a perfect preparation for the later A380 operation, because until then I only flew a Fokker 100 with 110 seats and the A380 is much bigger with its 600 seats. In the meantime, my wish has come true: as an A380 captain, I am not only sitting on the left side in the cockpit again, but I am also allowed to exercise the same management position from before at Emirates.

For many years, Emirates was considered one of the best employers, have your expectations at that time been fulfilled?

Absolutely! For me there is no better place to work than here, for one thing Emirates is a global airline, the number of A380s and at the same time the route network served is unique. A similar selection of destinations and opportunities would probably not have been possible anywhere else. The colleagues at Emirates are great, there are over 120 nationalities working here which is exciting. Every Emirates pilot I know also lives in this fascinating city, I am enthusiastic about Dubai and can imagine that I will continue to live here after my active career.

In May 2014, on the occasion of Emirates’ 10th anniversary in Austria, you flew the A380 to Vienna. The fact that you, as an Austrian, were flying the world’s largest commercial aircraft to your old home country probably made you particularly proud at the time?

I would say that was the highlight of my entire pilot career so far! First of all, you have to know that it was the first ever scheduled A380 flight to Austria and that I was chosen to fly to my former home base. The atmosphere on board was different from the very first minute, people were very excited and emotional, some passengers had T-shirts printed with their seat number especially for the flight. The course of the flight from Dubai to Vienna was the same as usual in the cockpit, but when taxiing in to the parking position in Vienna, I realized the dimension of the event for the first time. I still remember it very clearly today, the parking garages were closed and filled with crowds of spectators, and regardless of whether they were on the plane or outside, everyone was in a good mood and highly delighted about the event. It almost seemed as if every vehicle there was at Vienna Airport was waiting for my arrival. I have never seen so many blue lights at an airport before. I was and am grateful that I, as an Austrian and A380 pilot, could be part of this event!

To explain in layman’s terms, does it actually make much difference to you as an experienced pilot whether you fly on an A330/340 or A380?

The Airbus line is relatively similar and Airbus is known with its “cross-crew qualification” that you can be retrained relatively easily on the different A320/330/340 types. It’s much the same on the A350 and A380, though of course to those patterns it’s another leap. The A380 is not only fascinating from a passenger’s point of view, but also from a pilot’s point of view. I would even say that the A380 can do everything a pilot could wish for. Of course, it is also particularly nice that the A380 has four engines, many aircraft types of this type no longer exist today …

The A380 is the top class, have you already fulfilled all your life’s dreams from a pilot’s point of view, would you still be tempted to fly another aircraft type during your career?

It’s always interesting to learn something new, but for now I hope to continue flying this aircraft for as long as possible. Just recently, they started to upgrade the business class and add a premium economy class. I therefore believe that the A380 will continue to be part of the Emirates success story! The nice thing is that Emirates has already announced that they want to operate this aircraft until the 2030s, so I could retire with the A380.

Emirates recently took delivery of the last A380. How does it feel for you to know that the history of the Airbus giant is slowly but surely coming to an end?

Sadly, emotionally! But the nice thing is that the A380 will continue to fly for many years to come. The reason why Emirates will continue to operate this aircraft in the coming years is that the A380 is extremely well received by customers. The aircraft is extremely spacious, comfortable and quiet, and the people who come on board are delighted to see that they are flying on an A380.

In your opinion, will the A380 continue to be used by other airlines?

I think so, because the A380 will continue to have its place in the market. I even hope that one day an A380neo will come onto the market! (smiles)

In the last two years, aviation has gone through the biggest crisis in its history. How did you experience the time in Dubai?

The company has always taken good care of both the pilots and all other employees during this time. We continued to fly the A380 except for a short interruption of a few weeks, and now there are again 27 destinations to which the A380 flies regularly, and as of next summer there are to be 117 aircraft of the type in service again. I was lucky enough to be able to continue flying almost continuously during this time, and at the same time it was nice to see that the company was strongly committed to ensuring that the A380 would continue to be operated and that the aircraft would not be taken off the market. This decision was the right one, because in the meantime we are flying full planes again!

Is there a special experience you remember from the pandemic?

It was undoubtedly a great experience when I sat in the cockpit of the A380 again for the first time after a few weeks of flight disruption and was allowed to operate a flight to London- Heathrow. At that time, I was aware that I had probably been the only A380 in the world that had just been in the sky.

About:
The 53-year-old Markus Ausserhofer was born in Innsbruck as the son of a Tyrolean airline manager. In his youth, he moved with his parents to Vienna, where he initially studied medicine after graduating from high school. While still a medical student, he changed his career choice and obtained his pilot’s license in Australia. In 1995, he switched professionally to the cockpit when he was given the opportunity to take off on a Dash 8-300 turboprop and later on Fokker 70/100 aircraft at Austrian Airlines. In addition to his role as a pilot, Markus Ausserhofer works in the company’s quality management department. The experienced professional pilot (17,000 flight hours) has been flying for Emirates since 2008. In 2011, the Austrian switched to the cockpit of the A380 and today heads the airline’s quality department (flight operations).