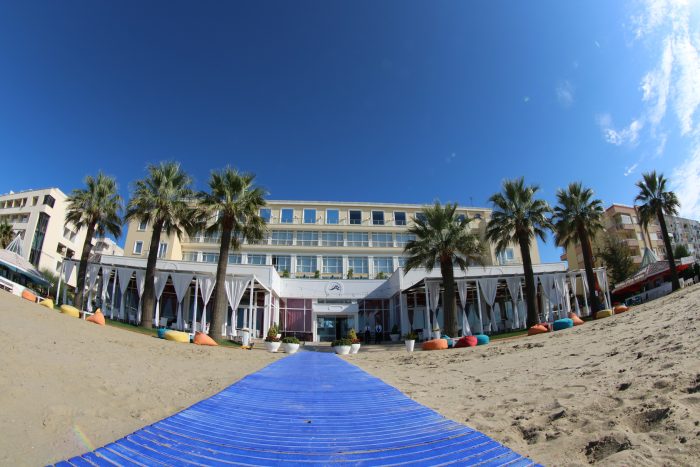 Albania’s tourism is booming! Tourism projects are being built everywhere and the number of visitors to the country is exploding. And despite all the hustle and bustle, you still exist, the oases of tranquility! The 5-star Luxury Adriatik Hotel & SPA in the port city of Durres is one of them.

If you leave Albania’s capital airport by car, you have to make a choice: if you turn east, you will arrive directly in Albania’s flourishing capital Tirana, but if you head west, you will reach Albania’s port city Durres in just under 30 minutes by car.

A sandy beach as far as the eye can see! However, it is not only the shallow-sloping beach of Durres Plazh that attracts thousands of tourists to Albania’s second largest city year after year, but also its more than 2000-year-old history.

If you want to follow in the footsteps of the city founded by the Greeks in the 7th century B.C., you will still find a multitude of architectural relics from that time in Durres. During a tour through the historic city center, the numerous monuments bear witness to the glorious past of this still important port city. The amphitheater, where the later rulers from Rome once held their gladiator fights with up to 20,000 visitors, the ancient fortress walls, the Venetian tower or the remains of the Byzantine forum are just some of the sights that you should definitely visit during a city tour.

As it was under the previous rulers, the port city of Durres is still essential in its economic importance for the whole country. Especially in the summer months, tourism in the region has developed into an indispensable economic sector in recent years. During the communist era, the beach south of Durres was reserved for the political elite. Today, one hotel follows the next on the famous and often crowded Durres Plazh beach. In addition to the 115,000 inhabitants of Durres, hundreds of thousands of people from Tirana flock to Durres Plazh every year to spend a fun day on the beach. This stretch of beach, with its numerous restaurants, stores, private apartments and simple 3-star accommodation, has become one of the most frequented beaches in the country.

In the midst of this lively place, however, is a jewel of a special kind, the 5-star luxury Hotel Adriatik & SPA (https://www.adriatikhotel.com/). The stylish and at the same time charming hotel which counted to the first of its kind at this beach section and whose history already goes back to the year 1957, was reserved up to the end of the communism exclusively for the elites of the country and foreign state guests. The Hotel Adriatik is still unique in many ways, because here you will find not only all the amenities you would expect from a 5-star hotel, but also a lot of peace and harmony in a thoroughly lively environment. To get a first impression of the charming hotel, I recommend every guest to do the same and immediately after arrival to visit the restaurant terrace of the hotel to take an excellent cappuccino with an unobstructed view of the sea. The drinks are served by an extremely attentive staff, which the hotel owner Nevila Dudaj, in the absence of suitable Albanian training facilities, trained in-house. With classical background music and an unobstructed view of the sandy beach, one quickly falls in love with this icon of the Albanian hotel industry.

The hotel has a total of 70 rooms, which are privately owned by the Dudaj family after the hotel was privatized and completely renovated in 2003. A variety of room categories are offered, and during my stay I opted for an “Executive Room” with a sun terrace of about 40sqm overlooking the sea. The hotel’s rooms were last renovated in 2017, with the hotel owner putting a lot of love into details at the time. In addition to a colorful yet understated décor of the rooms, I was especially completely convinced by the spacious terrace with private sunbathing area. Of course, the Adriatik Hotel also has a large outdoor area, which has two pools including a bar, as well as a tennis court.

If all the facilities are still not enough for a relaxing stay, you should make an appointment at the 400 square meters Queen Teuta SPA, which has a heated indoor thalasso sea water pool – a modern gym – a sauna – a Turkish bath – a hamam – three massage rooms and a room for facial and skin treatments. Not to forget the excellent cuisine of the hotel, two restaurant spoil guests with creative and modern creations of Albanian and international cuisine.

If, like me, you want to discover more of Albania, you should take advantage of the services offered by the hotel’s own tour operator (www.adriatiktours.com), which has an office in the hotel lobby. On the occasion of my stay, I used the services of my charming tour guide Mario and our driver Elvis for a day trip to Vlora, in the south of the country and not only got to see unique places, but also learned a lot about Albania.

The central location of the 5-star luxury Hotel Adriatik & SPA on the approximately 362km long Albanian Adriatic coast, only about 35km away from the capital Tirana, as well as the excellent price/performance ratio, will probably cause me to visit this “treasure of the Albanian hotel industry” again soon.