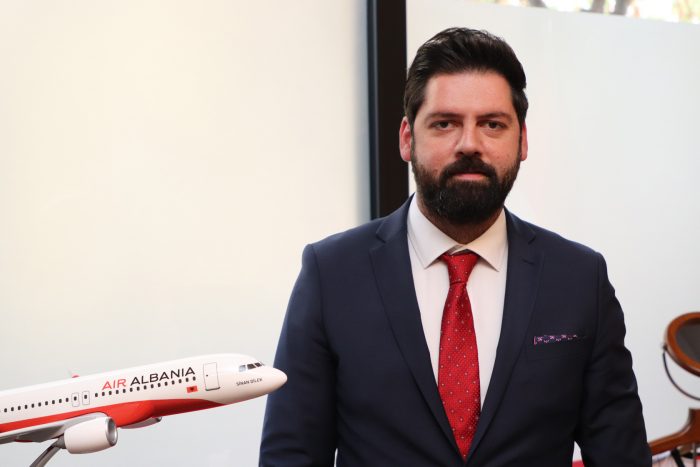 Air Albania CEO Sinan Dilek explains in an interview how much Turkish Airlines has in the Albanian national airline, why Air Albania is not only focusing on the diaspora and how the fleet will develop.

aeroTELEGRAPH:
Air Albania was established in 2018 as the national airline of Albania, what were the motivations behind this?

Sinan Dilek:
The story started in 2016 when the government had the idea to create its own airline! Now you can ask yourself why this idea came about? Albania already had several national airlines that failed, but this country is on the rise and the number of those who left the country is large. These people travel regularly and every year the demand for air travel increases. In other words, there is a large ethnic traffic to Albania and the country is on the rise in tourism. These opportunities offered by the market were no longer left to the foreign low-cost airlines!

How did it come to the foundation?

A tender was launched in which foreign companies participated, including Turkish Airlines. Of course, with its reputation, the airline had a good status among the candidates. The following year, our airline was awarded the contract and in 2018, I came to Albania to build the airline from scratch with our Turkish Airlines know-how. In September 2019, we took off for our first flight to Istanbul and shortly after to Italy.

What kind of airline would you describe Air Albania as?

That was also one of my first questions when I took over the project. The market in Tirana had already been destroyed by the low-cost airlines, these low-cost airlines had taken over the market, charged high-priced ticket prices and offered no service. I remember once during the height of summer on a typical VFR (Visit Friends and Relatives) connection to Italy, I was offered a one way fare of €650. In my opinion, the market belonged to be regulated by a state-owned airline precisely because this country and these people simply deserved a better product. At the same time, we asked ourselves the question, should we be another low-cost airline or a full-service airline?

Correct, at Air Albania every ticket includes 30kg checked baggage, 8kg hand luggage, catering and flexible ticket conditions. We also offer business class on board our Airbuses. From the beginning, we have tried to offer the service product of Turkish Airlines on the Istanbul-Tirana route with a “copy-base”.

Where is the Turkish Airlines signature reflected in Air Albania?

During the initial phase, technicians, pilots, operational team, instructors and management were provided by Turkish Airlines to build the company with our know-how from the beginning. We brought the experience of Turkish Airlines on board and partly took over the product such as catering on the Istanbul-Tirana route. The employees have been and will be trained according to Turkish Airlines standards and we are happy to invest further in their training. This will allow us to pass on our philosophy and prepare Air Albania for the challenges of the future as a European thinking airline.

Meanwhile, low cost airlines have flooded the market in Tirana, how difficult is it to compete against these companies in the domestic market?

Very difficult to be honest, because that is the biggest challenge for us! Every route we offer from Tirana is also offered by at least one low-cost airline. Some of them are the big giants in the market, others are local competitors.

On the Tirana-Milan route, there were three airlines competing with each other, people were asking why the new Air Albania is now serving this route and what is the difference in the product? It is important to know that passengers are very price sensitive and sometimes a few euros difference in price can be decisive in choosing an airline. But people have seen and tested our product for themselves and have remained with us as passengers.

Did you also succeed in appealing to non-Albanians?

Absolutely! We already have many customers from Turkey and Italy, we are broadly positioned with our local sales systems. The diaspora is important for us, but of course all other customers as well! Albania has so much to offer, wonderful beaches, historic cities and much more, this country has so much left to explore. Let’s just take the southern coastline around Saranda, this region of Albania could become a new “Alanya” in the future in my opinion. Beautiful beaches, clean sea, reasonable prices and above all residences that could be bought by foreigners. I was previously responsible for Norway at Turkish Airlines as Country Manager and I learned that 30,000 Norwegians have already found their new center of life in Alanya, Turkey alone. We had planned to offer “tour packages” for Nordic countries in 2020, but then Corona came along.

How well did you get through the crisis?

At the height of the pandemic, we had to stop flying at short notice. We were able to maintain the Istanbul-Tirana connection for a while until Turkey also banned entry. We were then very quickly assigned the task of operating repatriation flights by the Albanian government. I can still remember well, everything began on 20 March, I was three days at home, we had lockdown, when I got the order to organize these return flights. Within a very short period of time we had gathered our crews, divided our teams into groups to minimize the risk of infection and provided the necessary hotels.

In total, we carried out 103 repatriation flights with our A319s, bringing more than 10,000 Albanians back home and flying out more than 7,000 Albanians to other countries. Many Albanians are known to have found their new center of life abroad and were visiting Albania when the crisis broke out. We have flown to Rome and Milan, but also to London, Zurich, Madrid, Barcelona and sometimes we have looked for other business abroad. For example, we did repatriation flights from Frankfurt because we knew that many Albanian passengers coming from JFK were stuck there. Looking back, it was a hectic time, but at the same time we worked very focused, our team gave everything to meet the demands placed on us.

And how has tourist traffic developed recently in Albania?

In the summer before the pandemic, Antalya was one of the most popular vacation destinations for Albanians. During the crisis, Albanians were unable to travel and found that their beaches were actually very attractive as well. The beaches were crowded and the prices went up. The market has changed and new countries, such as Russia and the Baltic States, have brought guests to Albania for the first time. Poland jumped on the bandwagon and also brought many vacationers to the country. These countries were looking for alternatives and found them in Albania. In August, the industry had increases of plus 20 percent.

Are you planning to further expand your fleet?

Next summer, several aircraft will join our three A319/320 fleet. You have to know, when we started our operations in 2019 there was a delayed delivery of our first aircraft due to the Boeing 737MAX issues. Then in 2020 it was also not possible to grow as planned, there were new virus variants and constantly changing entry regulations. However, in 2022 we expect a full business year for Air Albania for the first time.

And what’s next for your route network?

From November, we will expand our offer! Our first focus will be on ethnic destinations, as the first passengers to return after the pandemic will be Albanians who want to visit their families. Apart from that, of course, we want to attract tourists as well as businessmen.

This summer you offered flights from Kukes to Zurich and Istanbul for the first time, how satisfied were you with the connections?

In July and August, the utilization of the flights was really good, but in September and October, demand dropped again somewhat. At the beginning, we weren’t sure whether Kukes Airport would be completed on time, but you actually did it! People worked hard and with a lot of motivation and dedication on this project and were still able to finish the airport in time. We at Air Albania said to ourselves that although these flights are a challenge, at the same time they are an opportunity for us, because the catchment area in Albania and Kosovo with its large share of diaspora in the UK, Germany and Switzerland is really big. We started by thinking about where we could fly to in such a short time and what markets we wanted to target in such a short time, Zurich was one of them.

The thinking on that was simple, if you look at the markets. Just look at the nearby Pristina airport during the summer, several times a day flights to Zurich are offered at far inflated prices. When we announced our new offer from Kukes, we entered the market with extremely low prices at short notice to promote the new product with success.

Does this mean that you will continue to serve Kukes Airport?

Of course! We will increase frequencies and fly to more destinations and countries in the coming year. We are planning two more connections, which ones I don’t want to mention at the moment.

I would like to do it, but we only ever look at the figures and make calculations for a route! Currently we see that around 45-50% of the passengers who fly via the hub in England and Germany continue on to North America. There is a large diaspora around Jersey (New York), around 100,000 Albanians live there. The Tirana-Istanbul route is also the second largest feeder of the Turkish Airlines Istanbul-New York (JFK) connection! Therefore, yes, we would like to do this business, but we also have to be ready for it, because a long-haul flight is something different from short-haul.

Before you start something like this, you need to have calculated it several times, because many have already perished in such projects. Currently, however, the question does not arise for Air Albania, because Tirana Airport is not yet able to handle wide-body aircraft such as an A330.

About Sinan DILEK:
Even during his school education, Sinan Dilek, now 38 years old, started his first professional experiences as a holiday intern in a travel agency and at the Istanbul Grand Bazaar. After a few years with various private companies, the trained economist tried his hand as an entrepreneur. In 2012, Sinan Dilek changed his profession and joined Turkish Airlines, where he held various positions until 2018, including General Manager Norway. In April 2018, he moved to Tirana as Managing Director of the newly established Air Albania.