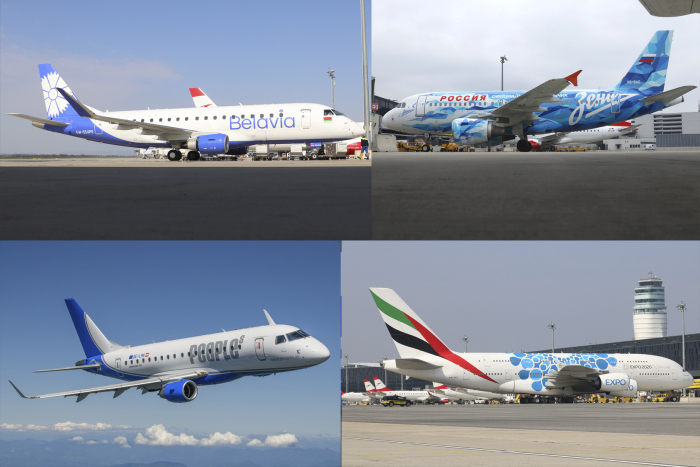 The big bang and the hoped-for rapid recovery of the aviation market have so far failed to materialize. Nevertheless, there have been small signs of hope at Vienna Airport since the beginning of the summer flight schedule. More and more airlines are increasing their services and some of those airlines that left the site with the outbreak of the COVID-19 pandemic are returning.

While most airlines suspended or minimized their operations exactly a year ago due to Corona, Belavia -Belarusian Airlines continued to invest in its product and even opened new routes. On April 25, the airline celebrated its first anniversary in Vienna.

After an interruption of almost 19 years, Belavia- Belarusian Airlines began last year to resume the flight connection, which is so important for the economy of both countries. Since then, an Embraer 175 with 76 seats takes off up to three times a week from Schwechat Airport for an almost two-hour flight to the Belarusian capital Minsk. During the past year, Belavia operated 112 flights on the connection, carrying around 6,000 passengers.

On the occasion of the anniversary, JSC Belavia Belarusian General Director Igor Tcherginets was pleased with the success of the connection: “Belavia Belarusian Airlines was one of the few companies that did not suspend flight operations during the pandemic period. Moreover, the company was able to operate flights to three new cities under difficult conditions. The capital of Austria is one of these routes. We are very glad that we were able to add this European flight to Belavia’s route network. The fact that today we are celebrating exactly one year since the opening of this route speaks of the correctness of the decision, which was made despite all the challenges.”

As of April 18, state-owned Rossiya Airlines is once again connecting Vienna Airport with a direct flight to St. Petersburg. After a 13-month break due to the pandemic, flight FV 6604 with an Airbus 319 with 128 seats takes off again every Sunday at 11:40 a.m. from Schwechat Airport to St. Petersburg.

Rossiya Airlines, which is part of the state-owned Aeroflot Group, has been operating the popular Austria connection since spring 2000. Until the outbreak of the pandemic last March, the connection to the city of white nights was operated once a day. In addition to continuing to build up its domestic flight connections, Rossiya Airlines is now also working more intensively on rebuilding its former international flight network.

To mark its inaugural flight to Vienna, Rossiya sent a colorfully painted Airbus 319, with a special livery of St. Petersburg’s FC Zenit soccer club, to the Austrian capital. Rossiya Airlines operates a fleet of 76 Airbus, Boeing and Sukhoi aircraft. In terms of the number of aircraft fleet, Rossiya Airlines is among the fastest growing airlines in Russia.

After a year’s hiatus, Emirates brought its Airbus A380 back to Vienna on Thursday, March 25. Shortly before, the Gulf airline officially announced that it would operate the superjumbo on the route between the Austrian capital and Dubai for 14 days only during the Easter travel period. However, due to sustained demand, the A380 operation has now been extended to the end of May.

Emirates Country Manager Martin Gross cites several reasons at once: “Vienna is currently a really very successful route.” The utilization of Business and First Class is also “extremely pleasing”. That’s why the decision was made at headquarters to extend the operation by several weeks right away, until the end of May.”

At the end of March, Austrian regional airline PEOPLES quietly celebrated its 10th anniversary. In a brief statement, Managing Director Thomas Krutzler said only briefly, “Given the current situation, there is currently nothing to celebrate.”  With the increasing travel restrictions between Austria and Switzerland and the resulting decrease in demand, all flights have been suspended between December 21, 2020 and April 12, 2021 due to the COVID-19 pandemic.

Despite the difficult circumstances, the company can still be proud of what it has achieved. Since its launch, the Austrian airline has completed 17,344 flights and carried 827,049 passengers.