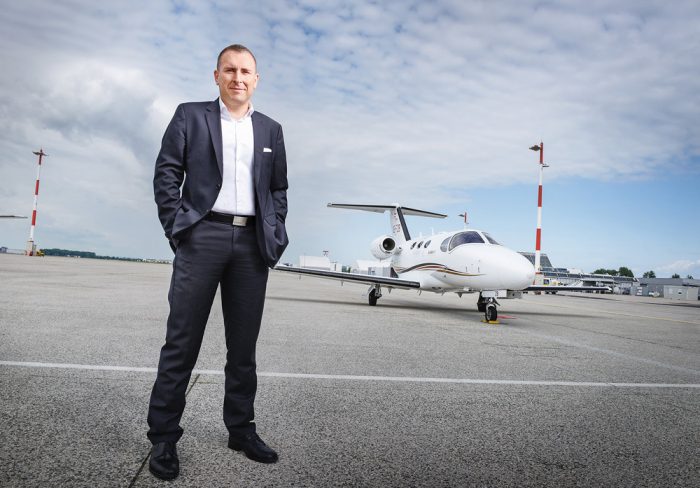 When you think of Austria’s largest airline, the one with the red tail unit will certainly come to mind. Wrongly thought, in fact the largest Austrian-owned airline is GlobeAir based in Linz- Hörsching, which has been successfully covering the booming market of Very Light Jets in Europe with its Cessna Citiation Mustang Jets for years.

GlobeAir founder Bernhard Fragner dreamed of a career as a pilot at a young age. However, the fact that he would one day become a pilot of his own 20 aircraft airline was not part of his plan. Twelve years after founding the charter company for private jets, GlobeAir is not only one of the market leaders in European business aviation, but also one of the winners of the Corona crisis.

The Covid-19 pandemic has hit the aviation industry hard worldwide and while demand for flights is steadily declining across Europe, the airport organization ACI (Airport Council International) reported a -71% decline in passenger numbers in August, other areas of aviation even recorded slight growth. This is true for the commercial airlines in the D-A-CH market and especially for the segment of Very Light Jets, the small and inexpensive business jets, which also include the GlobeAir fleet. In concrete terms, this meant that GlobeAir’s August revenues were up +21.4%, passenger numbers up +11.9% and the number of flights operated (1248) up +10.7% year-on-year.

Several factors are responsible for these increases. On the one hand, the enormous time advantage of a private flight, on the other hand the changed travel behaviour of the passengers. The constantly changing travel regulations as well as the fear of Covid-19 are currently unsettling many travellers, who fear an infection on board, for example, because despite the most modern filter systems, one has to spend several hours with a large number of strangers in a very confined space at the airport as well as on board aircraft.

A GlobeAir flight is of course a good alternative here, because while on a scheduled flight you have up to 700 contact points, on a private business flight this number is reduced to just 20.

Passion, motivation and a never-ending optimism

Austria may be a small country, but despite its manageable size it is rich in inventiveness and people who believe in their dreams. One of these people is the aviation pioneer Bernhard Fragner. The founder and CEO of the private jet provider GlobeAir completed his training as a private pilot at the age of 26, after having wasted hours and hours in his previous professional life in a car, travelling from one business appointment to the next.

Soon, professional appointments with a single-engine Cessna 172 were being handled in a much more compact travel time. However, Fragner had to realize that this aircraft was unsuitable for longer distances, which is why he, together with friends, purchased a former training aircraft from AUA subsidiary ÖLS (Österreichische Luftschule). This twin-engined Cessna 310 quickly became the “everyday car” for him and his business trips. It was at this time that the idea of starting his own airline was born, which he put into practice after intensive study of the subject of business aviation. At least almost, because, as Fragner had to realize, founding a company in Austria is associated with many a regulatory and party political obstacle.

However, “can’t be done – doesn’t exist” is not part of Bernhard Fragner’s vocabulary, and so he pulled out all the stops to obtain an operating license (AOC) for his airline, which is currently under construction. This included, among other things, writing a letter to the then Austrian Minister of Transport Hubert Gorbach, which, contrary to expectations, led to an invitation to a meeting that paved the way for the founding of the company.

In the meantime, funds from private sources were deposited with the American aircraft manufacturer Cessna for a purchase option on three Citation Mustangs and the search for a possible investor for the GlobeAir project was started.

“At my first meeting with the Upper Austrian industrialist Friedrich Huemer (Polytec Group), he boldly threw my business plan into the garbage before my eyes, but at the same time asked me to come back for another meeting with a convincing business plan on an A4 sheet,” said Fragner.

Huemer finally believed in the success of the project and invested in the foundation of GlobeAir in 2007. Just under a year later, on September 15, 2008, Bernhard Fragner was personally presented with his valid AOC by Transport Minister Gorbach and on the same day GlobeAir took off on its first commercial flight to Braunschweig.

However, it was not an easy undertaking to assert itself on the European market as a new, Austrian commercial airline, because the start of GlobeAir’s flight operations, with its nine employees and three aircraft, came at a very bad time, the peak of the global economic crisis in 2008.

Market studies had previously shown that 85% of all business jet flights in Europe carried only one or two passengers on average. The business model of a flight operation with a homogeneous Very Light Jet fleet with only four seats on board was therefore obvious. At the same time, during the economic crisis, providers fought an enormous price war, as Fragner emphasizes: “A lot of money was burned in the first few months, but time has taught us that companies should be lean. Our focus is on the customer – we have always asked ourselves, what does the customer want? I can fly from A to B with any aircraft, but it is important for us to always focus on the customer and fulfill their wishes”.

Today, twelve years after GlobeAir was founded, the company holds a market share of 54.9% of all European business traffic. The Austrian airline has thus not only become the European market leader, but also operates the largest Cessna Mustang fleet in the world. In Europe nearly 700 private jet providers offer their services, but hardly any other company understands how to adapt to the needs of its customers as well as Fragner’s more than 140-strong GlobeAir team.

“Customer, customer, customer. The customer is at the center of my business, 24 hours a day, 365 days a year,” says Fragner. His success seems to prove him right, because in 2019 his airline operated 11,500 flights and generated revenues of more than 35 million euros.

Private jet: Just something for Celebraties?

Of course, the question for customers is what a flight on board a Globe business jet costs. The GlobeAir website www.globeair.com therefore offers numerous price examples of popular connections, such as a flight from Salzburg to Nice for €4,490 (for max. 4 passengers). This price may seem high at first glance, but renting a larger business jet above the Very Light Jet category would at least double the price for the same route. It is also interesting to compare the GlobeAir offer with a ticket booked at short notice with conventional airlines. For example, at the time of writing this report, Austrian Airlines offered four regular one-way (economy class) tickets two days before departure (September 19) for € 2539. According to the AUA website, the planned travel time between the destinations would be 7-8 hours (incl. train journey Salzburg-Vienna). Those who prefer to fly from Salzburg with the parent company Lufthansa via Frankfurt would not only have to plan 15 hours for the trip, but also have to pay € 3814,- for four regular Business Class tickets. Comparing the fares with the GlobeAir prices, the price of the private jet provider is quickly put into perspective, which is why Fragner wants to set aside the misconception that private jet flights are only for celebrities who sweeten their flight with caviar and champagne.

The GlobeAir product is, according to Fragner, much more in the premium business class: “Granted, you probably sit much more comfortably on board a first-class widebody jet than you do with us, but our product is much more focused on the flexibility and privacy of the customer. The issue of time and the associated ability to customize the flight schedule plays a much more important role here than the choice of aircraft”.

The high proportion of regular customers (86%) from the business, private travel, sports and athletic sectors should prove the company and its concept right. For those who would like to enjoy the luxury of a private jet flight themselves and are flexible in their choice of dates and destinations, it is recommended to regularly search the company’s website for the many empty private jet flights on offer. At the time of my research, for example, I found last-minute offers for transfer flights on the routes Linz-Zurich, Linz-Brussels or Salzburg-Nice for only € 590,- per flight.

Fit for the future

The outbreak of the Covid-19 pandemic had initially caused sleepless nights and existential fears for Bernhard Fragner as well. But instead of burying his head in the sand and simply waiting and seeing how things would turn out, as some of his competitors did, GlobeAir’s management decided to continue to drive the business forward during the lockdown. For example, aircraft and crew were split across Europe to allow national flight operations to continue during the lockdown. While many competitors became losers of the crisis, the unwavering fighting spirit of the GlobeAir team has resulted in almost regular revenues being flown in despite the crisis. Due to the low number of flights offered by the airlines during the peak travel season of July and August, GlobeAir was also able to win new customers and convince them of its product.

Long before the Corona crisis forced aviation to a standstill, the company was already considering expanding its business in the tourism sector. Since the beginning of this year, the tourism expert Dieter Pammer has been strengthening the GlobeAir team in order to expand the contact and cooperation with tour operators. The first successes were accelerated by the Corona crisis.

The headquarters in Linz- Hörsching are already thinking aloud about a possible replacement of the Mustang fleet with next-generation aircraft. “Within the next five years, there will be a fleet exchange,” says Fragner. Possible candidates would be the Cessna Citiation M2, Embraer Phenom 100 EV or the Honda Jet Elite, although such decisions are not made overnight and the final type selection is only to be made in the next one to two years.

The GlobeAir “Dreamteam”, as the airline is called on the aircraft radio by the way, can look forward to further successful years in the European skies thanks to aviation pioneer Bernhard Fragner and investor Friedrich Huemer.

“Because the human desire to travel will always be there,” says Fragner.