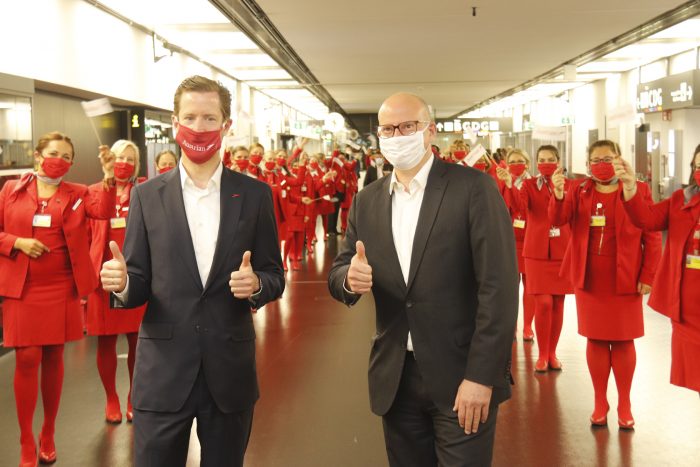 After an almost 90-day corona interruption, Austrian Airlines was able to celebrate a very emotional maiden flight on Monday 15 June. After the suspension of the European Covid-19 travel restrictions, the first AUA jet took off again for a commercial flight from Schwechat to Munich.

A look back: In the early morning of March 19, the last Austrian scheduled flight from Chicago landed at Vienna Airport. This was followed by weeks of uncertainty among the 7,000 employees, because during the Covid-19 pandemic nobody could predict when and if the commercial flight operations of the now 63-year-old company would start again? Although Austrian Airlines undertook numerous freight & repatriation flights on behalf of the Federal Government, regular flight operations were out of the question due to existing travel restrictions.

Now that the future of the company has been secured thanks to a 600 million euro rescue package from the federal government, the airline has begun to slowly restart flight operations in recent days. Austrian Airlines board member Alexis von Hoensbroech took the opportunity to personally accompany the flight to the Bavarian capital Munich.

Already at 06:30 a.m. flight OS 111 took off as scheduled with an Embraer 195 jet under the command of Embraer fleet chief Ewald Roithner and security captain Rudolf Buchensteiner in the direction of Bavaria. Before that, the approximately 80 passengers passed a trellis of 70 employees of the Austrian ground station on the way to their gate. Accompanied by loud cheering and much applause, the staff welcomed the first passengers to this historic Austrian first flight. A noble action, because the staff came to Schwechat Airport in their free time to witness this historic moment!

Alexis von Hoensbroech took the opportunity to thank his employees for their loyalty: “The farewell at Vienna Airport was an emotional moment for me, the goal was always to get the airline in the air. I think I speak for all 7000 AUA employees when I say – We are ready to fly”.

On board, the mood among the almost 80 passengers was excellent. Even if the smile of the flight attendants could not be seen due to the obligatory mouth and nose protection, the joy about the restart was clearly audible to the flying employees. After an almost 50-minute flight, the OE-LWO in Munich was welcomed by the airport fire department with a water salute. The service on board the jet was also slightly modified to Corona’s specifications, with only packaged food of the usual DO& CO quality being served to passengers.

The health protection of passengers is of special importance for both Flughafen Wien AG and Austrian Airlines. For example, not only was a compulsory wearing of masks ordered for all passengers in the terminals of Vienna Airport, but it was also included in the General Conditions of Carriage of Austrian Airlines. In general, all passengers are advised to wear a protective mask during the entire journey – from the journey to the airport to their arrival at their destination – and to always keep a minimum distance.

In addition, Austrian Airlines offers its passengers to check in online from home and to use the possibility of checking in their baggage contactlessly at the “Self Baggage Device”. After each flight, the aircraft are cleaned very intensively on armrests, tables and in the toilets. Each passenger will also be given a disinfecting wipe when boarding the Austrian aircraft. As already reported several times, the HEPA filters on board the Austrian aircraft can filter more than 99.9 percent of all viruses and bacteria, which is why, according to Austrian CEO Alexis von Hoensbroech, passengers do not need to worry about a possible risk of infection on board.